28 Things That Women Should NEVER (Ever) Do In February

Listen – I’m going to let you in on a little secret that I have tried to deny for nearly 20 years.

A quick note to my Mom: I know you hate it when I use the word sucks, but there’s just no other word for February. Well – there are a few – but I think you would dislike them a whole lot more than sucks, so we’re going with it.

There should be a lot of things to love about February.

Valentine’s Day is always fun, and two of my kids were BORN in February – so seriously – what’s not to love a out this month?

The weather is usually grey and cold – even though we think it should be spring.

It’s only 28 days, but it’s the longest 28 days of anyone’s life. It’s almost like you’re running a marathon that lasts for an entire 28 days. And I’ve run a marathon.

It wasn’t fun. It was painful, and I had to go to the bathroom allllll the time, and I got in a huge fight with my husband, and I wanted to quit, and I wasn’t even all that overjoyed when it was over because I was just DONE.

But I think the worst part is that it creeps up on you. You get through the holidays, and it’s fun. January rolls around, and you have snow days and it’s still fun because everything is new and fresh. And then you’re like, “Spring is nearly here. This has been a good winter. We’re doing this!”

And then it’s February 3rd, and that’s when you realize that everything is bad. And it might be that way forever.

And the next thing you know you’re sitting at a brand new-to-you salon because you found someone that could squeeze you in THAT DAY, and you’re telling them to cut off 10 inches of your hair, and give you blue streaks because eff it.

These are things that might be good decisions at any other time of the year, but not in February.

Instead, you just need to print this out and read it every morning and maybe even get a February accountability friend that you can call when you’re thinking about getting a divorce or trying a little meth so that she can talk you out of it.

And then you can do the same for her the next day when she thinks that it would be a great idea to paint all of the ceilings in her house black.

And to all of you that have no clue what I’m talking about, who love February, or who just aren’t willing to admit that an entire month should not even exist, let me say that I’m super happy for you. Now move on. This post is not for you.

For the rest of us….

28 Things That Women Should NEVER (Ever) Do In February 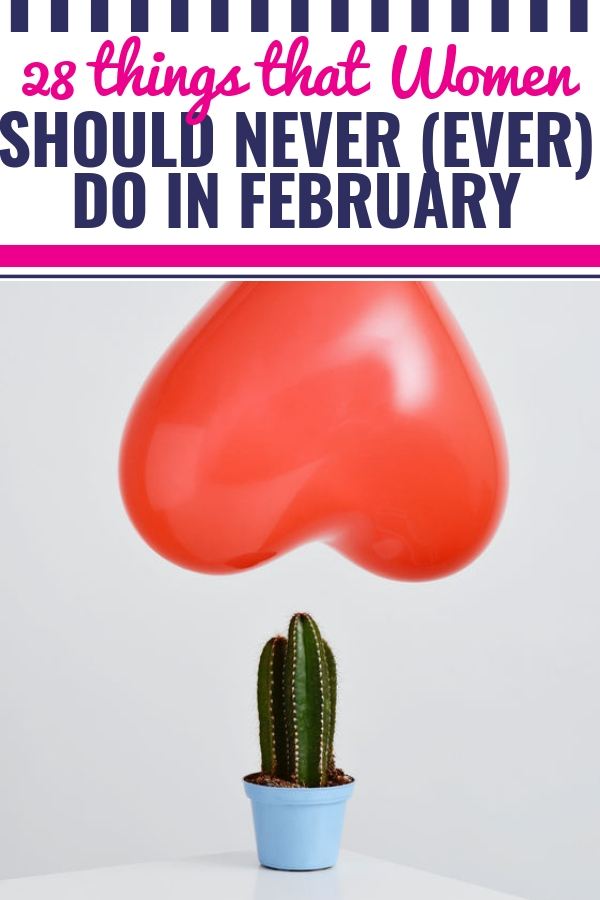 Print this. Read it. Send a copy to your February friend to hold each other accountable. WE WILL GET THROUGH THIS!

For 28 things that will help you SURVIVE (and maybe even thrive) in February, click here.