45 Ways to Annoy Your Husband

I’m going to be honest with you. My husband can be a little annoying sometimes.

Sure – he lets me write pretty much whatever I want on this blog. He encourages me to have girls nights. He gets home from work every night in time for dinner – and even makes dinner a few nights a week. He likes to help with the grocery shopping, the laundry, the cleaning – and on the weekends he likes to do family things like take all the kids to the zoo.

I think that women are naturally much less annoying than men. Therefore, it is our duty to ATTEMPT to annoy our husbands every now and then so they can understand the pain we live with on a daily basis. Amiright? 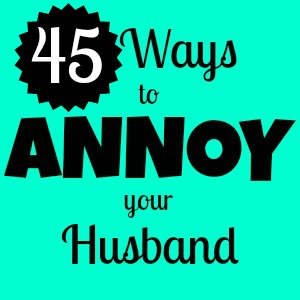 45 Ways to Annoy Your Husband

1. Duh. Paste his head onto other people’s bodies and post them on your blog. If you don’t have a blog, it’s just as easy to print them out and tape them around the house – like on his bathroom mirror, or on the gallon of milk or in the front seat of his car.

2. This one’s mean, and I suggest you only do it under serious circumstances.

When you get down to the last roll of toilet paper – hide it.

I did this once before we had kids. I’m pretty sure that Even Steven did something really annoying – or maybe I had PMS – the details don’t matter.

But when I saw we only had one roll of toilet paper left in the entire house, I hid it in my bedside table. The really frustrating part was that this went on for TWO WEEKS, and he never said a single word. Not once. See how annoying he can be? But I’m guessing this technique will be annoying for a normal husband.

4. Sell his stuff at your garage sale. My mom used to do this to my dad all the time. And every garage sale, he’d come out with a laundry basket, find his things and carry them back into the house. For weeks he’d walk around with price tags on his shirts that said 25 cents. I gave away Even Steven’s Bengals clock at our last garage sale, and he hasn’t stopped talking about that. (It’s been a year.)

5.  Call him at work just to chat. This drives Even Steven absolutely nuts. I don’t have a single thing to say, but I still try to get the conversation to last a full 8 minutes. So far, my record is 2 minutes – and that’s after 10 years of practice.

So – here’s the deal – I could only think of 5 things. I guess I’m just not all that annoying…

But luckily I have some amazing readers to fill in the blanks for me! You all rock!
Here they are:

9. While hubby is talking about boring stuff like computers… no matter where you are, immediately pretend to fall asleep (and snore….loudly)…bwahahaha – drives him nuts! (Natalie – NorthShore Days)

10. Walk slowly in front of the TV during the big plays of the game on some unspecified “errand”. My husband loves this! (worked so much better before the “pause live TV function”) (Molly B.)

11. My husband loves it when I forget to put laundry in the dryer and bonus points if he’s out of undies and they are all sitting there wet and getting moldy (Beth L.)

12. Wait until he’s in the middle of his favorite show and then ask him all sorts of banal questions about it. If you run out of questions about the show, start making random comments about your parents, his parents, the kids, etc. When he presses pause, apologize and stop talking. When he starts the show again, start talking again. Keep doing it until he catches on, then do it just once more. (There is a fine line between an annoyed husband and a sulky husband). (Amy)

13. When my husband is watching something stupid on TV, I show him every funny thing I find on Pinterest, whether I think he would find it equally as funny or not.

14. I also talk about the mommy bloggers I follow like I actually know them and they’re my BFF’s, and that drives him bonkers. I do the same thing with American Idol contestants.

15. If he makes me watch something I don’t want to watch (like the first time he made me watch Star Wars), I ask a billion questions until he gets frustrated and turns it off. I’ve taught my son to do the same. (13. – 15. from Katie O.)

16. Wait until your husband goes out of town for the weekend and repaint the bedroom pink. (Stephanie)

17. My guy HATES it when I clean the garage when he isn’t around. I always end up throwing / giving away a bunch of stuff. I never do this with his stuff unless I have already gotten the green light but he is such a packrat he has a hard time parting with anything. (Christine)

18. This might fall more into “serious grounds for war” category, but if I win at Monopoly (or any game for the matter), he gets grouchy and sulks for days. (Meredith – The Mom of the Year)

19. Ask for a drink from his cup and drink all of it but a swallow at the end. (Kat)

20. Threaten to hide his race car before race day. It drives him nuts because he knows one day I will make good on my threat. (Anette) Editor’s note: I really don’t understand this one at all – but for some reason it makes me laugh really, really hard…

21. Use his razor. They love that. Makes them have warm fuzzy thoughts of you in the AM.

23. Make sure your car is ALWAYS about a gas-hand-width above empty when he gets in to drive it someplace. They like to feel needed.
21. – 23. (From Kim)

22. If you have babies: once the Diaper Genie is full, casually suggest to your hubby that the baby’s diaper could use changing. I’ve avoided emptying out that thing for years using this method! (Bridgette)

23. I give my husband wet willy’s when he is trying to fall asleep…or stick my finger up his nose. (April)

24. When he leaves the room to fetch a drink from the kitchen, I wait until he gets back, sits down, and then ask him where’s the drink I asked for? {Which of course, I never did ..lol} Mostly he’s not sure, so he goes back – 99% of the time I drink Coca Cola therefore, that’s what he brings back ……. only for me to tell him I actually asked for juice! (Linda)

25.Leave hair in his hair brush and leave it on the bathroom counter (this is how i got him trained on putting the toilet seat down after using it… every time he left the seat up he got a gross hairbrush full of hair 😀 )

27. I ‘clean up’ husband’s stuff and he has no idea where it went (usually stowed away in a location that makes perfect sense to me, like where-it-goes in his desk or nightstand or closet…) He comes to me and says “have you seen ____ ? I can’t find it – did you clean it up somewhere?” Excellent source of amusement/annoyance. (Callie)

28. Take a pic of him in his boxers and tell him there’s a contest called Husbands in Boxers – for the funniest photo and the prize is a trip to Vegas -and watch all hell brake loose – my hubby almost broke my hand trying to get the camera off me. (Suzan)

29. While he’s watching Sunday football, tell him you have to run to the store (if he wants any dinner) and while you’re walking out the door, let him know that your daughter’s poopie diaper needs changing. Then, inadvertently be gone for two hours. (Kate)

30. I like to follow him all around the house when he’s getting ready for work in the morning, talking the entire time about the last phone conversation I had with my mom (or sister). He LOVES that! (Rachel)

31. I especially love moving his things around. I pick his wallet and keys up off the counter and put them in the cabinet directly above the counter where he left them. Then I pretend I am sleeping when he gets ready for work in the morning and runs around crazy trying to find them. (Liza)

32. My favorite thing to do to annoy my husband is to giggle out loud at the book/blog/article that I am reading and try to read it to him. (Heather)

33. – 34. (From Kristen) Fart and giggle like a school girl. When he farts, smack him and tell him how despicable he is.

Initiate sex. Pretend to get the big o, then immediately fall asleep before he’s “done.”

35. My husband LOVES it when I *innocently* question him. Such as:

36. After you shower, leave your hair in the drain – or even better, plastered onto the wall. Men love that. (JD – Honest Mom)

38. I annoy my husband by playing “Name That Tune” but always making it an obvious tune like “Mary Had A Little Lamb”. Also, I don’t wait for him to say he wants to play. I’m a REALLY good annoyer. (Kelley – Kelley’s Break Room)

39. I LOVE to show my husband my latest Pinterest finds, which includes projects I’d like for him to do around the house. He won’t come near me when I have my laptop open! (Jenn)

40. When he is in a nice hot shower…. sneak in to the bathroom (don’t worry this is G-rated) and throw ice water over the top of the shower curtain. OOOOO it makes him MAD, but I laugh so hard every time. Eventually he laughs with me. (Amy)

41. When you are really annoyed re-arrange the kitchen then forget to tell him where everything is.

42. As soon as he gets home follow him around like a puppy chatting non-stop till he tells you to stop and catch your breath.
or

43. As soon as he gets home ask him to take you somewhere to get something stupid like a soda. (I can’t drive anymore as I’m blind. This works very well.)

44. When he’s watching TV get the kids and dog’s wound up and running through the house 100 miles an hour screaming at the top of their lungs. (41 – 44. from Melynda)

45. I LOVE to give him a play by play of who all the cast members of my Real Housewives shows are! Who hates who. Who is a crazy lush. Who has the worst plastic surgery. Who is dating who…it is awesome. He hates it. (Erica)