My Mom Tells All

It’s no secret that I love my mom. It’s also no secret that I love to pick on her from time to time. (You can click here to see all of my “mom” posts.) From lying to me about all sorts of things growing up to putting maxi pads all over my back in 8th grade, she kept my childhood interesting – to say the least.

And – today – my mom is here to share her side of the story and answer your questions.

QUESTION: Some pretty strange things happened to Anna growing up. Did you have the foresight to know she might put all of these stories in writing someday?

Never! There was a time I was afraid that Anna would be a journalist on T.V. and tell the family secrets on prime time – but I certainly never thought that what we saw as just plain everyday living would turn out to be such funny blog stories.

While we were living it – it didn’t seem odd or different – sometimes it did seem hilarious – but from the start my first instinct as a parent was to get a camera and photograph a moment as opposed to thinking – oh “time out.”

I did worry that I wasn’t approaching too many situations as a grown-up. But I thought I was doing it secretly and no one would ever find out – little did I know… 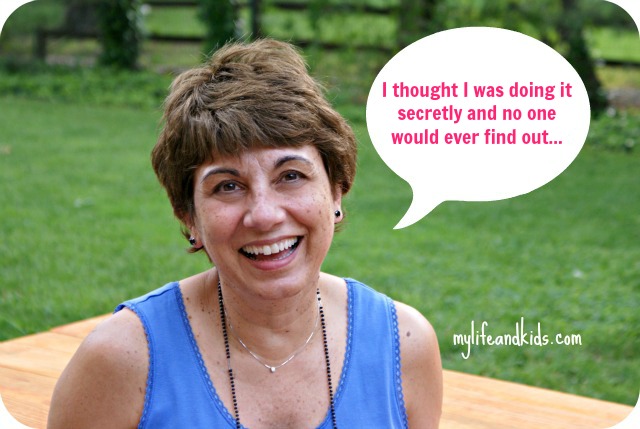 If I had had the foresight to think my parenting would be taken public I probably would have done some things differently and would have tried to wear make-up and look better just in case.

QUESTION: Is Alice your favorite grandchild? It’s okay, you can admit it.

Alice is my favorite GIRL grandchild. I am especially delighted to have a granddaughter because I am so close to my grandmother and my mom and I am thrilled for Anna to be able to have that possibility as well. Also – my attic and house is full of dolls and doll furniture and dress-up clothes. I needed a girl to play with me. But I adore – big time – ALL my grandbabies.

QUESTION: Did you know that Even Steven was “the one” before Anna? Tell us about the first time that you met him.

I didn’t have a chance to know before Anna because the first time I even knew he existed was when she called at midnight to tell me she had met “the man she was going to marry.”

And terrified when I thought about it because she had never ever said anything like that before and I was determined that she finish college – and here she was only 8 weeks into her 4 years!!

The first time I met him was when he drove over to pick Anna up for a New Year’s Eve party over Christmas Break. I was against Anna going, but surprisingly her Dad gave her permission. I trusted his judgment, so she was allowed to go. I remember Matt and his friend coming in the house and I thought – oh oh – this guy is more mature and more charismatic and more handsome than any of the others she has dated… we could be in trouble here. He was polite and cute and then they were gone… leaving me to really worry the rest of the night.

QUESTION: Best piece of parenting advice? And why DID you always lie to your sweet darling daughter?

Parenting advice is so difficult. But one thing that her Dad and I always tried to do was to treat our children at least as well as we would treat our friends – by that I mean we were polite when we asked them to do things, never demeaning and we didn’t interrupt or ignore them or brush off their questions and concerns. I think we were good at being tuned in to their feelings. My Mom would say that we were too tuned in – but it was important to us.

When we were at family gatherings or bigger groups we tried to be aware of where they were and how they were doing – smiling or at least making eye contact once in awhile so they knew we were there for them. The saying is “Be Present” kids know when you aren’t really mentally tuned in to them. 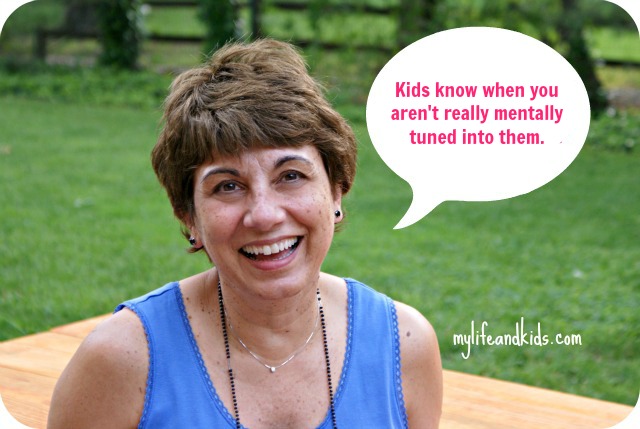 That’s not to say we didn’t drop the ball or have disagreements or disappoint our kids because we certainly did, but it wasn’t for lack of trying.

I never really thought of myself as lying to Anna or Nick. Sometimes my answers surprised even me – and I have to say that I started out kidding about some things – like the gene that kept us from singing in public… but I mean she bought it… it seemed to make her feel better so I went with it. Who knew she would tell it to the world years later?

When Nick would ask why so and so had a basketball hoop with cement in their yard and he didn’t, I would always tell him that those parents must love their son more. Now that would crack me up but think what that would look like in writing now if he ever wrote a tell-all! 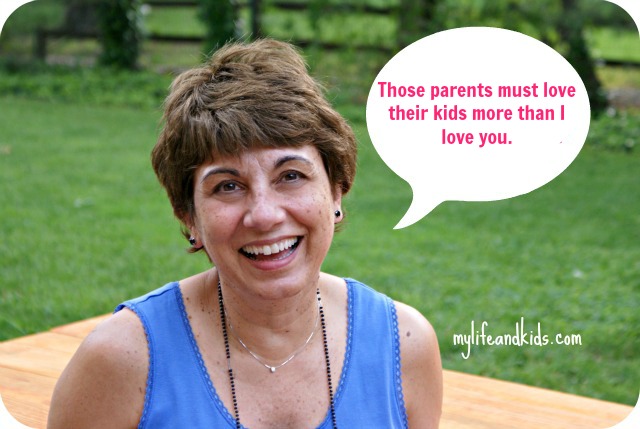 QUESTION: Do you think Anna’s as funny as we all do?

I think Anna is very funny. I am amazed at her memory and her ability to tell about something that seemed normal at the time and turn it in to something hilarious or horrifying.

QUESTION: Did you really dislocate your jaw when you screamed at Anna?
You can read more about that here.

Sadly – it’s really true!! She was yelling and acting like a nut, and I had had it! (probably PMS’ing if the truth be known.) I ran after her up the stairs. I remember saying something like “you want to yell? I’ll show you yelling!” and so I screamed/yelled as loud as I could, which really wasn’t natural for me. I must have opened my mouth too wide, and my jaw popped!

It was humiliating on many levels. It shocked both of us and shut her up – that’s for sure! I haven’t yelled like that since and probably never will again.

Good thing the chiropractor that fixed my jaw was a good friend of ours. When Anna spilled the beans in his office, he laughed so hard he couldn’t adjust me for awhile… not very professional of him would you say? Yup – good thing he was a friend.

QUESTION: What is your favorite post on Anna’s blog?

It’s difficult to say because I enjoy them all. I cry at the heartfelt ones about her parenting and her awareness of the joy that parenting brings and her awareness of how fast time passes when you have a family. I love seeing pictures of the grandbabies, and we laugh together about the funny things that happened – usually at my expense.

QUESTION: What was your response to Anna’s tattoo?
You can read about that right here.

I was shocked on so many levels! We had never discussed it, and I was also shocked that my son and daughter-in-law – okay – Holli not Nick – was a party to such a thing. AND – I think I probably paid for the darned thing!! 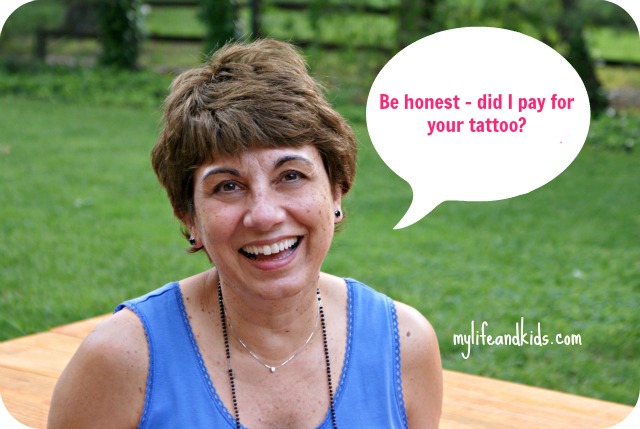 QUESTION: What is your version of Anna throwing up in the coffee shop?
You can read about that right here.

Okay – that is my least favorite of all her posts. It was a terrible horrifying moment and one that I didn’t think was even slightly funny. She told it exactly as it happened.

I did exactly as she said. I ordered her to stop immediately, and I was mortified. She was a mess and continued to throw up while Holli was laughing so hard that I was sure she would pee her pants. It was a nightmare.

Every few months I re-read it to see if by chance I can find the funny. I do laugh when I read it out loud… it was so absurd. And imagine dragging her outside and having her vomit in the bushes on the other side of what was a one way screen and all those poor diners on the other side watching her while they were trying to eat!!! Is it any wonder I can’t go back? Ha!

Just bring up the name of the coffee shop to Holli and she goes off in hysterics. And if the two of them are together and it comes up? Even more hilarious. 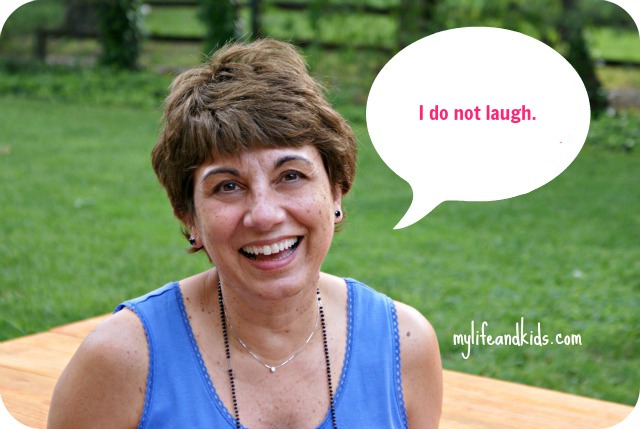 There are so many but this one stands out.

I was in a grouchy mood one day and Anna was about 4. She had been asking me if she could take her Barbies outside and play with them and for no particular reason I said No.

I actually went to my room and closed the door and read a magazine (which was very rare for me), when I heard a clomp clomp clomp down the hall and then a knock on my bedroom door.

“It’s me, your husband Michael” – said Anna in a very deep voice.

“What tablecloth do you want Anna to use when she takes her Barbies outside to play?”

I loved it – she had even put on his size 15 boots and clomped down the hall to make it more believable.

I was so impressed with her cleverness I just replied

“She can use the red one”

And she went on to play outside with her Barbies. She was happy and by then so was I.

My mom will be responding to every single comment personally!