Crying at the Vet

In addition to needing some dental work, he also had a 2 1/2 pound tumor hanging between his back legs that needed to be removed. 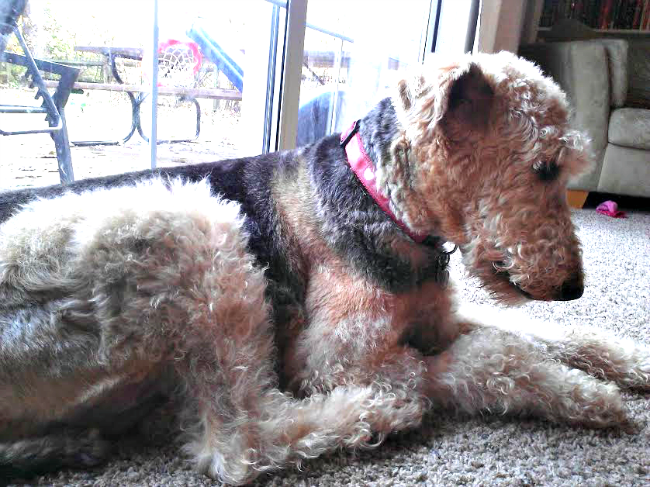 The growth was more cyst than tumor – but at 2 1/2 pounds – the vet said it was the largest tumor they’d ever removed from a dog.

I felt both proud and broke when she told me that.

His surgery went well, and it just so happened that I had all three kids with me when I needed to pick up Big Hairy Dog.

Everyone was reminded to use their manners and their very best behavior, and we were ushered into a small room where the vet and Big Hairy dog were waiting for us.

Big Hairy Dog was a little out of it but looked like a new man without his dangling goiter.

I instructed the kids to share the two chairs against the wall, and the vet proceeded to give me post-op instructions.

Unfortunately – the tumor had been wrapped around his penis, and the vet kept saying penis over and over and over again. And I was trying really hard to focus on how to care for his incision and what medicine to give him when I heard sweet little Alice whisper to her brothers, “She said penis.”

And then they all laughed hysterically.

And I really wanted to tell him to be quiet and scold him – and a better mother would have – but I was laughing too hard to say much of anything.

Which just made the kids laugh even harder – because – you know – we’re all supposed to be on our best behavior but instead they’re talking about penises, and I have apparently turned into a 12-year-old boy because I can’t stop giggling.

The vet didn’t even crack a smile. Instead, she pulled out a medical book detailing the various types of worms that dogs can carry – and what the worms look like under a microscope and offered it to the children as a form of distraction.

This will come as a shock to no one – that didn’t work.

And then with a totally straight face she told me that I would need to brush Big Hairy Dog’s teeth every single day.

That made me laugh even harder.

And it doesn’t really matter, but did I mention that Simon was wearing Alice’s pink princess rain boots?

We were finally released out into the lobby where we had to wait for invoices and medication, and of course the kids couldn’t calm down.

There were shelves of canned dog food, and Simon immediately began stacking them to build a tower.

Big Hairy Dog’s mouth was bleeding a little from a pulled molar, and some of the blood dripped onto Miles’s boots – which caused a bit of a scene.

Luckily Alice was behaving, but I was still quite distracted as I attempted to pay, manage a woozy Big Hairy Dog, a distraught Miles with blood on his boots and a determined Simon to build a tower of dog food higher than his head.

While I tried to use my calm voice to get a handle on my children, the receptionist said,

“Enjoy every minute. They grow up so fast.”

I’m not even kidding. She seriously said that.

At first I thought she was joking – I mean – it’s such a cliche. It’s something that moms write about on the internet – saying things like, “I enjoy moments but not every moment,” and “it’s okay not to enjoy every moment,” and blah blah blah. So while I’ve read about things like this being said, it’s not something that anyone has actually said to me.

I mean – she had to be joking, right? But when I looked up and started half laughing half smiling she said,

And then I punched her in the face.

In fact, I started crying a little bit.

And as the tears rolled down my face, I’m sure the receptionist thought it was because I just couldn’t imagine my sweet kiddos growing up and moving out.

But really it was the giant bill that I held in my hands that brought me to tears.

That – and the thought of having to brush the dog’s teeth. I think we’ll put Even Steven in charge of that…